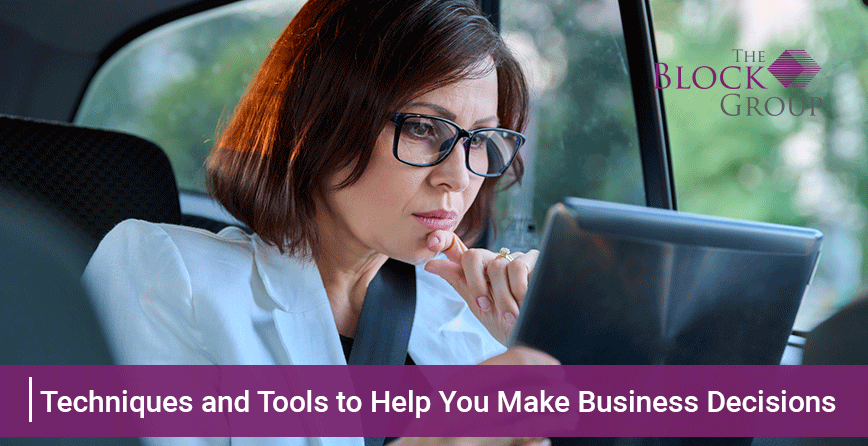 Techniques and Tools to Help You Make Business Decisions

Decision-making occurs at every business level, including mundane decisions made daily by lower-level employees and far-reaching executive decisions that may require years of deliberation.

Many decisions will be executed by an employee under a rulebook, company guidelines or the company handbook. However, day-to-day decisions can be just as consequential.

Here's a look at five basic steps for decision-making, how decision-making tools can help, and some techniques that will help you weigh your options.

While numerous entities – such as academic institutions or advice blogs – have attempted to distill the decision-making process into a series of five to seven steps (the University of Massachusetts-Dartmouth's seven basic steps is an oft-cited one), all processes more or less follow this format:

Why decision-making tools are useful

When embarking on a formal decision-making process, many businesses turn to tools and techniques to help leaders organize their thoughts and arrive at the best decision for their organization.

Here's a look at several ways businesses can benefit from decision-making tools.

1. They can help you make sense of the data.

When analyzing data related to a decision, it can be challenging to weigh all the varied factors and their impact on your decision's outcome. A decision-making tool will help put things in perspective and guide decision-makers to act according to the organization's most important factors.

2. They encourage brainstorming and creative thinking.

When tasked with using a decision-making tool, team members involved in the process tend to stretch their imaginations to develop different possible outcomes to consider. Decision-making tools inspire more creativity, guiding users to think outside the box rather than weigh only the options that immediately come to mind.

3. They help organize and prioritize goals.

Decisions tend to involve multiple goals. For example, a company may need a project to be profitable while also adhering to laws and regulations. Decision-making tools can assign importance to a decision's competing goals, helping you settle on a solution that matches your company's priorities.

4. They remove bias from the decision-making process.

Everyone has some bias that can cause a mistake during the decision-making process. The tools remove a great deal of individual bias and emotion from the process. For example, a product manager may want to launch a new product their department created without thinking clearly about production costs or customer demand. A decision-making tool would introduce these factors in its framework.

5. They prevent your company from being guided by fallacy.

A formal decision-making process can prevent your company from being guided by fallacy, often resulting from "gut decisions" or a lack of planning. In the field of behavioral decision theory, which examines the separation of objectively rational decision-making and (often irrational) intuitive decision-making, these fallacies fall into the latter category.

"Decision-making fallacies are rampant in companies of all sizes," said Robert Stephens, founder of finance and strategy resource provider CFO Perspective. One example is sunk-cost bias, in which irretrievable investments are used to justify future decisions, only to cause further harm.

Stephens gave the example of a client selling their business to cover the debt and investment they had put into it. They used a small business valuation based on expected performance rather than actual market value. The price was too high, and no one was willing to buy. "I pointed out that those numbers were sunk costs that were irrelevant to both them and the buyers," Stephens said.

Another example is extrapolation bias, in which current trends (such as a rise in housing prices) are expected to continue in the same direction – a fallacy Stephens often observes in finance.

There are dozens of tools and techniques for organizing your thoughts during the decision-making process. Here are some of the more popular options.

These methods have their critics. "I'll be honest and say that 99% of the theoretical management models and tools aren't actually all that helpful," said Pete McAllister, owner of SEO agency OutreachPete. "It's all information you know from common sense and still requires further extrapolation ... trying to map it out on a higher level is superficial."

It may be telling that McAllister now has a blog about post-corporate life, Recovering Commuter.

Other business leaders say they found such tools useful for group analysis. Of the SWOT and peer analyses that Stephens has conducted at various companies, he explains that they "allow the group to come to a consensus on the current situation."

They also help everyone understand any underlying assumptions behind recommendations, added Stephens. "These tools have more benefit as communication tools than decision-making tools."

Artificial intelligence is increasingly used to help businesses make good decisions. The more complex a decision, the greater the benefit of using AI because it can process significant amounts of data using algorithms and computing power.

More and more companies are utilizing these AI systems to help with decision-making, and the industry is projected to grow by 37.2% over the next five years. In fact, according to IDC data, researchers predict that 85% of enterprises will combine human input with AI to become better decision-makers by 2026.

One such AI-powered tool is the MakerSights AI decision-making software for retailers. It analyzes product attributes, sales and customer data, and production parameters to help make decisions about new product introductions, marketing and waste reduction.

Another tool is the AI decision-making platform Rainbird, which focuses on optimizing customer experiences and creating new digital products.

While financial decisions can be weighed objectively, there's no economic model for morally guided decision-making. This becomes even trickier when employees must act as decision-making agents, where they're more likely to act on personal financial incentives rather than what's best – morally or financially – for the company as a whole.

This is where instituting decision-making best practices can be useful. Steven Schwartz, CEO of Varfaj Partners, referred to it in his company as a "pseudo-Kantian framework for decision-making around the office." The policy holds certain imperatives, including underpromising and overdelivering, pricing transparency and self-accountability, dictating all decision-making from team members.

"While the solutions these imperatives present are intuitive from a moral perspective, ultimately, I have found that this framework has eliminated individual or monetary bias and malevolent business practices with clients," Schwartz said. "This framework allows for team members to think within a certain value system separate from their own and thereby make decisions holistically that benefit both the company and themselves."