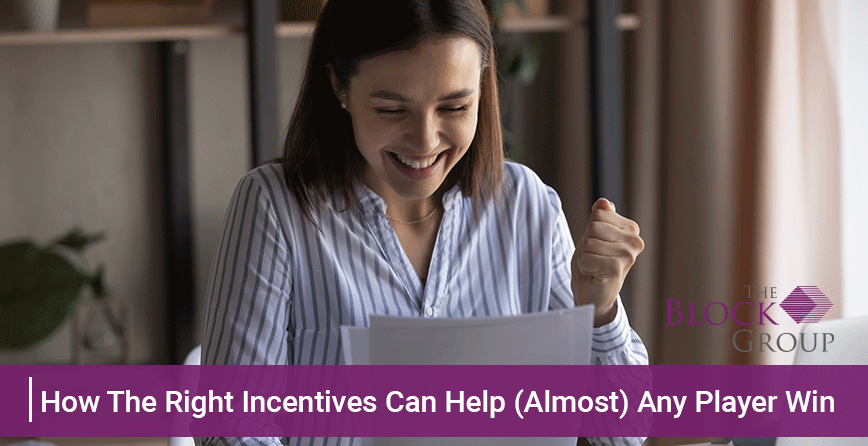 How The Right Incentives Can Help (Almost) Any Player Win

On any team, in sports or business, there are always going to be a few categories of players. There are the superstars and the ones who seem to struggle. There are team players and those who want to own the spotlight (or couldn’t care less), regardless of what’s best for the team. Yet, winning as an organization requires maximizing the potential of everyone on the team.

One of the biggest challenges for a manager is getting superstars to play nice with the rest of the team and raising the game of low performers. And while it may not seem like your best and worst employees or players have a lot in common, often the solution to a ball hog and a bench warmer are the same: Make sure they have the right incentives.

When optimizing a team and their incentives, the first thing to understand is who you’re working with. It’s typically pretty easy to recognize who the high performers are. They’re the ones who produce big, visible results. Not everyone is going to be a high performer, and that wouldn’t necessarily even be desirable. Great teams require linebackers, not just quarterbacks and wide receivers. Teams win when they have the right players in the right roles, allowing specialists to do what they do best unimpeded and elevating individuals with leadership potential.

Managing On A Quadrant

In many ways, this last category is the easiest to deal with; give them a plan to improve their performance, and if they don’t succeed, it may be time to cut them. The other three categories are more challenging from a management perspective, and also more important. They’re the ones that will help you win, but they need to incentivize the right way to support the team.

Low-performers with high-potential need training, guidance and mentorship. They also need to see that hard work to meet their potential will translate into benefits for them. Make it clear that they would be in line for a raise, greater autonomy or more time on the field and off the bench. Provide them with examples of players in a similar position who moved up. And make sure they have access to the education, training and tools that they need to reach their potential. Getting there is their responsibility, but most high-potential people will want to do their absolute best. (If it’s an attitude problem, however, there’s not much you can do.) If you suspect that one of your poorly performing players has a lot of potential, try to understand what incentives they need to reach it. Talk to them about it. They’ll tell you what’s holding them back (fear, lack of confidence, lack of training), and you’ll be able to devise a package that will help them dig-in and overcome that.

High-performers need a similar approach. If someone is a superstar—producing great quarterly numbers or generating big plays—but they’re not sharing the ball well, they may be in the high-performance, low-potential category. They’re already great at what they do, but maybe they’ve gotten a big head about it, or they’re not leadership material. If that’s the case, structure their incentives around what they need to do to maximize the potential of the entire team. Ask them what they want. Do they want more time on the ball? Do they want 20 touches per game? Do they want more money? Then give them that, but with caveats. You’ll get your touches on the ball, but you need to show up to practice and when you’re not holding the ball, you need to block for your teammates. We’ll pay you more, but you need to show up all the time, not just when it’s convenient, and you need to support small or less exciting projects, not just the one that has your attention. For high-performance, low-potential employees and players, incentives should be tied directly to the performance the team needs from them. At the same time, don’t limit their ability to keep doing the thing they’re good at. Whenever you can give them the ball and let them run with it, do it, so long as it doesn’t negatively impact the rest of the team.

Incentives are a bit different for your high-performance, high-potential players. These are the people who are already great at what they do, but they can grow beyond that. They haven’t hit their peak yet. Maximizing this person’s potential means doing a lot of the things you would do with any high-performance person, but it requires an additional element: A clear pathway for growth. The ability to take on a leadership role and greater autonomy will be a motivating factor for this person in addition to compensation and traditional incentives. Let this person know that they can grow in the organization and show them how. These are the players you can build a team around, and incentivizing them with opportunities to grow as leaders and providing concrete benefits from continued high performance will help the entire team win.