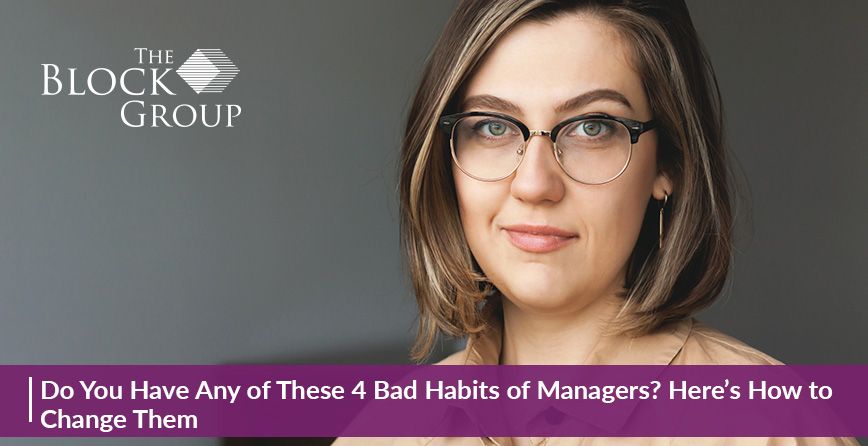 Do You Have Any of These 4 Bad Habits of Managers? Here’s How to Change Them

A leader is just one person, but their actions — good and bad — have an outsized impact on their organization. While positive behavior can help foster a culture of respect and trust, negative behavior can trickle down and make employees (and teams) mistrustful, inefficient and ineffective.

Of course, a leader’s bad habits don’t emerge the day they enter the corner office; they gradually develop over time. Unfortunately, organizations set managers up for failure when they don’t make it clear what habits need to change when they’re promoted, according to Elizabeth Lyle, an expert on creating high-performance teams.

“When you take on a new role, you have to shed the old one,” explains Lyle, a Boston-based managing director and partner at BCG. “Not only in terms of your actual roles and responsibilities, but also in terms of the behaviors that made you successful.”

Here are the habits that can hold back leaders — and people on their teams — and how to break them.

Bad habit #1: Solving instead of delegating

As they rise through the ranks at work, many people are rewarded for being great “solvers.” Once promoted, they often think the same behavior is how they’ll succeed as a leader.

The problem: When a leader swoops in to fix every problem, they’re robbing the members of their team of the chance to learn and grow.

How to break the habit

1. Give up some old duties — and do it openly

“Until we’re explicit about what we won’t be doing anymore, we can’t make room for our teams to rise to the occasion and perform those responsibilities in ways that work for them,” Lyle says.

So you need to hand over any responsibilities that entail solving. You can even make it official by hosting a ceremony where you bequeath them to your direct reports.

Lyle suggests making commitments to yourself and your team by saying “This is what I did before, and now I expect this of you” and “Here’s what I will do to complement and support what you’re doing”. Be sure to tell them: “I am no longer the problem solver; I am the reviewer of potential solutions.”

2. Get comfortable with saying “I don’t know”

“As leaders, we think that career currency is always having the answer. But in fact, we may just not know the answer or we may have not thought about it yet,” Lyle says.

In reality, she believes, “organizations should actually distrust people who have the answers at the tip of their tongue, haven’t taken time to think about it, and aren’t asking others to pressure test their thinking and their logic.”

Instead, leaders should create an environment where people feel encouraged to ask for input and information and to share their ideas and solutions.

If asked a question directly that you don’t know the answer to, resist the urge to guess. “Overemphasize ‘I don’t know’ because even saying ‘Oh, I’m not sure, but here’s what I would guess’ will be taken as gospel by your team,” says Lyle. She adds, “It doesn’t make you unqualified or vulnerable. It just means that you’re being responsible.”

It’s only human to like good news and to dislike bad news. But sometimes leaders go one step further and blame their team members for bad news or punish them for bringing the problem to you.

“Reacting in a way that makes people not want to be honest with you means the problems will become crises,” Lyle says. That’s because they’ll learn to delay telling you because they’ll become too scared of how you’ll react.

However, “if they know you’re going to react well, you’ll get visibility into problems you didn’t have before and the chance to help them fix it before it becomes a big issue,” says Lyle.

How to break the habit: When you’re told bad news, pause and say “thank you”

“Often, what triggers the negative reaction from leaders is they panic and think, ‘Oh my God, I have to solve it,’” Lyle says. “Think of yourself as part of the team, even though you’re the boss. Rather than going into panic mode, take a step back and gather yourself before reacting.”

If you’re someone who’s prone to overreact, “try to rewire your response,” Lyle suggests. “Commit to yourself that the first thing out of your mouth will be ‘Thank you for letting me know, because now we can solve this before it becomes a crisis.’”

When you “interrupt the habit” with a thank you, “all of a sudden your brain has launched into a very different kind of conversation,” Lyle explains. “You’ve basically short-circuited your normal response, and you have a chance to behave differently in that conversation.”

The challenges that businesses face today are rarely straightforward or simple. But a common mistake that some leaders make is trying to resist the complexity of their problems.

“We white-wash complexity by having meetings that are so diplomatic as to be, quite frankly, pointless,” Lyle says. “So much of the time we’re trying to avoid the gray areas where we might surface conflicts, and we smooth over what are likely to be uncomfortable and complex conversations.”

How to break the habit: Use complexity to inspire discussion and debate

Rather than trying to cover up any issues that are thorny or complicated, build in time with your team to address them.

“Carve out time at the end of a meeting to say, ‘OK, knowing that this thing has imperfections, how can we try and de-risk it as much as possible?’” Lyle advises. Invite your team to challenge the conclusions that you’re coming to. She says, “Ask them: ‘Where are the holes?’ ‘If we were in a different position, what could we do?’ or ‘What would our customers say?’ to bring other perspectives into the room.”

Another way to expand people’s thinking and tackle challenging topics together: “Ask three different people to articulate a different choice, and then have a conversation about each,” says Lyle. “Oftentimes, you could surface three legitimate ways to come at a problem.”

Bad habit #4: Not asking for feedback

We’ve all heard that feedback is important, but how and when you ask for it is key. It’s crucial to start asking for it early in your career. Lyle herself admits, “I didn’t realize how important this was until I was a bit too senior for anyone to be honest with me.”

There’s a window in your career when people are more willing to be honest with you “because you’re not so senior that they’re afraid,” she says. “Start early, because it will help you build up a reputation as someone who genuinely wants to hear feedback and will act on it. By the time that you’re senior, people will know that you’re open to hearing what they think.”

If you’re afraid you’ve missed the window to get honest feedback, don’t worry — it’s not too late.

How to break the habit: Be specific about how you ask for feedback

To get helpful assessments, you can’t be vague. “Ask for very explicit feedback, and ask for it ahead of time,” Lyle says. “Don’t say, ‘Every two weeks, I’d love to sit down and I’ll give you some feedback; I’d love if you could do the same.’”

Lyle recommends, “Instead, bring up specific situations. For example, you could say, ‘In the meeting the other day, I meant not to be the first one to speak but I did so anyway. Next time we meet, I’m recommitting to not being the first one to speak, so I can hear from the team first. Can you let me know if I do this? What else could I do in meetings to encourage others to contribute?’’ You’re basically saying, ‘I’m going to be following up with you to ask how I did,’” Lyle explains.

By empowering your subordinates with specific requests, you’ll not only get their honest feedback but you’ll also show that you want to break your bad habits and welcome their assistance to do so.