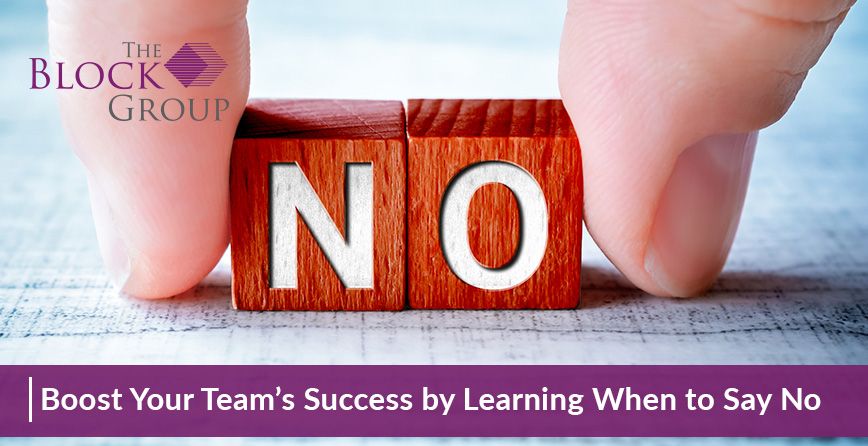 Boost Your Team’s Success by Learning When to Say No

In today’s workplace, saying yes to everything isn’t realistic – or healthy. By learning to say no the right way, you can reduce stress levels and advance your career, without burning a single bridge.

What is it about ‘no’ that makes it so hard to say at work? It’s a simple, one syllable word, yet all too often – even when we’re brutally overcommitted – many of us are incapable of uttering it. Afraid of appearing lazy, unhelpful or confrontational, the kneejerk office response is always a ‘yes’ – even when we know it’s a recipe for burnout. But the truth is that avoiding ‘no’ can have detrimental effects on everything from our physical and mental health to our overall career progression.

If you want to be really successful in the workplace – as an individual and as part of a team – you need to learn when, and crucially how to say no. And to do so in a manner that will not only succeed, but that others will love you for.

According to psychologist Dr. Scott Bea, Assistant Professor of Medicine at Cleveland Clinic, Ohio, and a leading expert in the power of ‘no’, we could be putting ourselves at risk of physical illness by saying ‘yes’ too often. Dr. Bea, who has spent years researching the topic, cites physical symptoms of stress such as muscle pain and gastrointestinal discomfort, as well as the psychological damage done by saying ‘yes’ too often.

“Think of it as carrying a set of logs in your arms,” says Dr. Bea. “There’s going to be one log too many at some point, and they will start falling to the ground. Try to notice if tasks are falling off your radar or you’re missing deadlines. That’s a clear sign you’re overdoing it and need to step back.” If you’d said ‘no’ to that last log, of course, none of the others would have fallen.

It’s human nature to want to say ‘yes’ to others – we are social creatures after all. But if we do so all the time, we run the very real risk of dropping those logs over and over again. A recent Stanford University study found that productivity per hour declined sharply when a person worked more than 50 hours a week. Furthermore, researchers found that those who worked up to 70 hours a week were only getting the same amount of work done as those who put in 55 hours. In short, carrying too many logs – in other words, failing to say ‘no’ to additional tasks – wastes time, energy and resources.

There’s no denying that ‘no’ can be an uncomfortable word to say – to colleagues, to superiors and particularly to clients. But since when did sticking to a comfort zone help anyone achieve their goals? We consulted some of the world’s leading business psychologists, career coaches, and etiquette experts to put together the ultimate rules for saying ‘no’ properly. Read on for how to turn a perceived negative into a major positive, to drive you and your team on to greater success.

How you sell your ‘no’ is important. A constructive ‘no’ when you’re overstretched allows you to show professionalism, while reinforcing the value of your time. Ideally, you want to be delivering that ‘no’ with clarity, kindness, and respect – and doing so with confidence avoids distorting or diluting your message. “Being confident when delivering your ‘no’ is key,” says certified life coach Dave Knight, host of the Sunday Settler podcast. “If you’re positive and assertive, it shows you value yourself, your time and your existing work. By focusing on that positive, you’ll reduce the chances of upsetting anyone.” Keep your reply short and focus on why you’re saying no: it’s because you’re committed to delivering top quality on your existing workload. So tell them exactly that – and do it with confidence.

Of course you never know when a difficult request is coming, but that doesn’t mean you can’t be prepared, with a list of useful responses saved away safely. According to UC Berkeley sociologist Christine Carter, “When we make a specific plan before we are confronted with a request, we are far more likely later to act in a way that’s consistent with our original intentions.”

So lay the groundwork now, by preparing a few professional-sounding lines in advance, like: “Thanks for thinking of me, but I’m overscheduled to a fault right now” or “I’ll give it some thought, but I’m already working on A and B projects at the moment.” This approach can be particularly helpful in terms of saying ‘no’ to a superior, which can be more difficult than saying no to a colleague.

“I often advise people to jot down what they’re going to say beforehand,” says executive coach Susy Roberts, founder of people development consultancy Hunter Roberts. “Whatever the situation, writing down what you want to say in advance can give you clarity – and that will help you get your message across successfully.”

The words and phrases you sprinkle around your ‘no’ make all the difference. In particular, terms like ‘prioritize’, ‘responsibility’, ‘support’ and ‘committed’ are all good to pepper into your response. “It sounds strange, but when saying ‘no’, the trick is to avoid negative words and phrases around it, because they lend themselves to an overall negative experience,” says Knight. “Sidestep words like ‘unfortunately’ or ‘can’t’, and instead use positive phrases like ‘I can’ or ‘How else can I support you?’ Giving your ‘no’ an optimistic twist with the right trigger phrases will always ensure it’s received better.”

The best ‘no’ always comes hand in hand with a ‘why’ – and the trick is to keep it succinct. By laying out your entire calendar, you run the risk of having other projects or deadlines challenged. Instead, summarize your current priorities neatly. “You don’t need to go into overly-long detail, and you definitely shouldn’t get too personal about things,” says Roberts. “But a short and valid reason is always necessary so people can understand the rationale for your ‘no’.” In practice, a simple phrase like “I have X project which is a high priority for delivery and won’t be finished for Y days” will get your ‘no’ across perfectly.

5. Come from a solution mindset

Ask if you can contribute to the project in another way, or tackle it at a later date. If possible, direct the requester to a helpful resource they might not have considered, such as a useful article or website. Above all, look for small ways to be helpful without taking on the entire burden, like attending brainstorming sessions or reading a first draft, for example. “You just need to be able to show people that you’d like to help them but it’s impossible to complete the entire task on this particular occasion – and reinforce the fact that they should always come back in the future,” says Roberts. Specific phrases to use could be: “I can support by doing…” and “Have you considered this alternative?”

This tactic is a win-win for both of you, because you’re taking the problem off their plate and yours, by placing it somewhere it can be dealt with more efficiently. Suggest other colleagues who might have more bandwidth or applicable expertise, or better still a solid external freelancer, who will thank you for it. “Saying ‘no ‘can be a positive thing for both parties, so long as you suggest alternative people who can do it instead,” says workplace psychologist and business etiquette trainer Paul Russell, founder of the Luxury Academy. “When doing so, always avoid using the word ‘but’, which can sound like you’re making an excuse. You’re not – you’re offering a viable alternative.” This tactic can be particularly useful when dealing with a boss. For example, you could say: “Could I suggest that [x coworker or y freelancer] handles it this time? Because I know he’s well versed in this area and extremely reliable.”

7. Be empathetic and compassionate

It’s always an effective strategy to acknowledge that your ‘no’ might be creating more difficulty for the person asking. Simply adding a sentence like “I realize that my decision means this job is going to be put back into your hands” can make all the difference, painting you as an ally rather than an adversary. The worst tactic is not acknowledging them at all. In other words, ignoring their request and hoping they get the hint. “Not responding is not a professional option,” says certified high performance coach David Grieve. “That signals that you aren’t showing any empathy or priority to the person making the request – and it doesn’t help either of you in the short or long term.” Instead, respond quickly – and always acknowledge the other person’s position.

Using ‘we’ is important because it creates unity and a sense of teamwork. You might not be able to help out on this specific occasion, but you’re still a team player and you’re still pulling in the same direction as them. This approach can be particularly effective when you’re saying ‘no’ on behalf of others too. “Saying ‘no’ can be a great way to demonstrate leadership in terms of protecting your own team, and that should impress those higher up the food chain too,” says Knight. “Plus, your team will love you for putting their needs and wellbeing first, and that will inspire them to work harder fro you.” To put this into effect, try a phrase like: “Our team is working at maximum capacity on X and Y projects. Perhaps we could look to a different approach, such as Z?”

9. Show gratitude for being asked

Always make it clear that you’re grateful to be asked. Remember, if someone is throwing tasks in your direction, it means they have confidence in you and faith in your ability. And that in itself deserves some recognition. Let them know you’re flattered to be considered – after all, you want to keep the door open to future, more amenable projects. “The best way to display gratitude is by saying things like ‘That sounds really interesting’ or ‘I appreciate you considering me for this’,” says Grieve. Ultimately it’s a ‘no’, but it sounds way better as a ‘no, but thank you so much for asking’.

10. Always end on a positive note

A good way of ending an email or phone conversation where you’ve delivered a ‘no’ is with a simple “Thanks for understanding”. You’re being professional, courteous and clear, but also confident, assertive and decisive, leaving no room for more back-and-forth. “When you’re signing off, you need to be polite but direct,” says Russell. “Don’t fall into the trap of insincerity at this stage, saying how desperately sorry you are. Your ultimate goal is to show that you’re able to make decisions in a clear-sighted way and that you’re direct and honest. The way you finish your ‘no’ needs to underline that.”