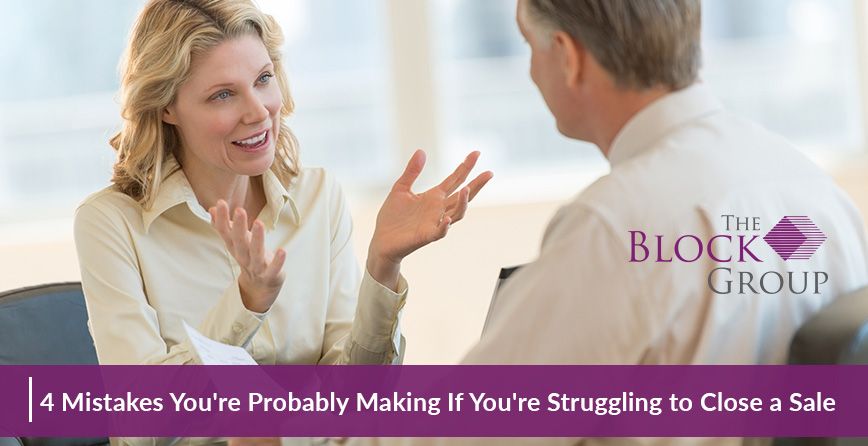 All new salespeople run into hiccups on their first few sales conversations. Sales is as much of an art as it is a science, and it’s true that practice makes perfect. But if you’re continuing to lose sales time and time again, it may be a telltale sign that some fatal mistakes are being made. According to Pipedrive, “statistics show that around one-third of all salespeople fail to hit their quotas either permanently or from time to time.” By pivoting from these mistakes, a massive ROI can be seen in your business — alongside a boost in your sales confidence!

The truth is, many salespeople never analyze their process to see if they’re making mistakes. They assume that because they learned from their sales leaders or a few sales books, they’re doing it right. You may have heard the popular notion that “sales is a numbers game,” or that the hardest working and persistent salespeople win if they just keep calling new prospects over and over again. This propagates the (false) idea that every prospect just needs some serious convincing to acquiesce and purchase. Sales is far more intricate than that, so assess if one (or all) of these four mistakes is interrupting your ability to close deals.

Many salespeople jump onto a sales call believing they have just a few minutes to share all the information pertinent to what they’re selling. So they launch into a full-on monologue, fitting in every detail and feature they can. Sound familiar? Talking at the prospect seldom results in a closed sale, unless the person has already made up their mind to purchase before you got on the call.

Rather, a tactful sales conversation is about how much you listen. Active listening is a technique in which you concentrate on what is being said so you can better understand the speaker. Instead of talking, you should be spending the qualifying portion of the phone conversation listening for certain concerns and questions that the prospect may have. It goes above and beyond mentally noting anything they say that’s pertinent to the sale. Active listening also entails markers of listening, such as nodding your head if you’re on a video call or in person, and asking open-ended questions to elicit more information. This makes the prospect feel more heard and understood.

2. You assume you know what the prospect needs

Even if the prospect reached out to you for the call and has expressed interest, it’s never advised to assume the sale or that you know what the prospect is looking for. Jeremy Miner of 7th Level Communications, who teaches a sales methodology that's based on behavioral science, says humans do not like being told what to do.

“Imagine that you’re on a call with a salesperson who says something about you that isn’t totally true or is totally false,” says Miner. “How would you feel? Would you trust this salesperson?" This mistake extends to "assuming the sale," meaning jumping the gun to set up another appointment or get their credit card information before they’ve even made a decision, especially if you sell in a complex selling environment. Instead, Miner encourages “dialogue in which the prospect does 80 to 90 percent of the talking so that they can persuade themselves through talking through their problems and potential solutions out loud.”

Use this technique and active listening to make sure that you are taking careful note of their concerns and not assuming anything about them until they tell you — and more important, themselves — that they need what you’re offering.

3. You’re trying to close too early

In line with thinking sales is a numbers game or assuming the sale, trying to close the sale too early in the conversation almost always leads to objections and rejection. If you have asked the right questions at the right time in that sales conversation, they will persuade themselves that you can solve their problems and help them to get the results they want. You should never be the one to push it. Why? Because the conversation could be in a good swing as you answer the prospect’s questions and they’re warming up to the idea of potentially purchasing.

Once you jump to the close — especially if you are using some cheesy old school closing technique — you come across as pushy, which breaks all the trust you’ve built with the prospect up until that moment. It makes it seem like they’re just another phone number on your list and that you’re rushing to get to the next one. Instead, ask commitment questions. These help lead them to the next step and then the next.

4. You forget (or fail) to follow up after the call

Just because an initial call didn’t end with a deal close doesn’t mean the lead is a dead end. If you've asked commitment questions, that will lead them to make smaller decisions with you — which will help them make the ultimate decision to purchase your solution. This is what spells the difference between the highest and lowest performers in sales.

With this vantage point, consider how sales is a long game. Seek to build a relationship with the prospect and learn about them through active listening and allow them to talk out loud. Never assume you know what they need, and ask commitment questions that help them progress in the sales process (unless it’s abundantly clear that they are not, and never will be, interested). By fixing these four common mistakes, you’re more likely to hit your quota this quarter.