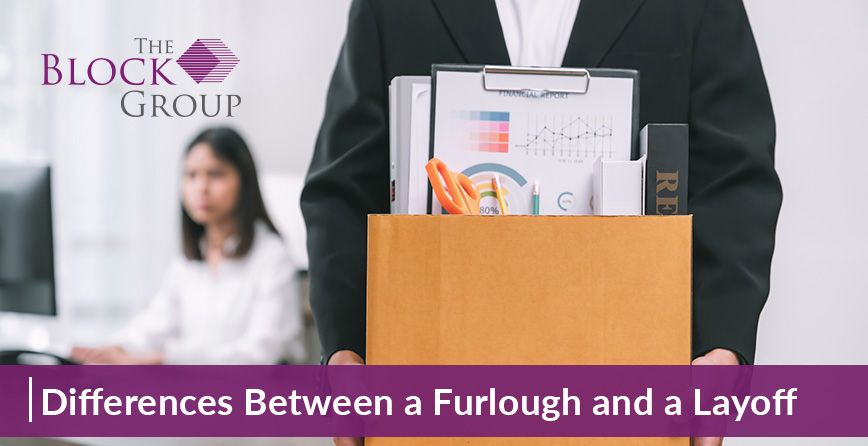 Differences Between a Furlough and a Layoff

Learn what furloughs and layoffs are to determine which one is best for your business.

Downsizing your company is never easy, especially in times of financial hardship. Employee salaries are one of the highest overhead costs for businesses, though, so furloughing or laying off employees may be your best (or only) option in a financial crisis. Before going down this path, you should understand the differences between furloughs and layoffs to determine which is the better solution for your business.

In times of need, companies often resort to furloughing or laying off employees to cut costs. Furloughs and layoffs may seem like the same thing, but their requirements and effects are very different.

When an employee is furloughed, it is under the assumption that the employee will eventually resume their normal work schedule. During the furlough, the employee's hours may be significantly reduced, or they may be required to take an unpaid leave of absence.

Hormazd Dalal, chief financial officer at Benefit Programs Administration, said furloughed employees may be required to take a certain number of unpaid hours off over several weeks, take a specified number of unpaid days or hours throughout the year, or take a single block of unpaid time off.

"For example, an employer may furlough its nonexempt employees one day a week for the remainder of the year and pay them for only 32 hours instead of their normal 40 hours each week," Dalal told Business News Daily. "Another example of furlough is to require all employees to take several weeks of unpaid leave sometime during the year."

A layoff is essentially just a termination, often due to a lack of available work. When a worker is laid off, their ties with the company are severed. Although permanent layoffs can be due to financial struggle or economic disruption (e.g., the coronavirus pandemic), temporary layoffs are common in certain industries.

"Some companies and industries (usually those that are seasonal) will do temporary layoffs, meaning they intend to rehire the same employees in the relatively near future – generally within six months," said Kara Govro, senior legal analyst at ThinkHR and Mammoth. "Temporary layoffs are appropriate for relatively short-term slowdowns or closures but are ultimately just terminations that are likely to be followed by rehire."

Key takeaway: A furlough is when a company forces employees to work fewer hours or take an extended unpaid leave, whereas a layoff is a permanent employee termination.

How does a furlough work?

A furlough is when employees are mandated to take unpaid leave or temporarily reduce their work hours. Furloughs often occur when a company does not have enough money to make payroll (e.g., during a state of emergency) or not enough work for their employees (e.g., during a partial organization shutdown). During a furlough, an employee maintains their relationship with the company, with the anticipation of eventually returning to their normal work schedule.

Before enacting a furlough, consider the local, state and federal laws that affect your company in this situation. Karen Stafford, Arizona president of Employers Council, listed five key questions to guide your company through the process:

"It is also helpful to think through these considerations and establish a plan that complies with the relevant laws prohibiting discrimination before taking action," said Stafford. "That way, once you are in the throes of the process, you can reflect on your plan to help guide your decision-making when and if the situation becomes challenging or emotional."

While employees are typically entitled to their health insurance and other benefits while furloughed, this is not always the case. If furloughed employees' reduced hours make them ineligible for certain benefits, you should inform them of this. You should also give them notice of their right to file for unemployment insurance if necessary.

Govro said employers need to keep furloughed employees informed about return-to-work dates, changes to the business, requirements or restrictions on return, and anything else that could help them plan for the future. A furloughed employee might eventually be laid off, in which case you should clearly communicate this decision as soon as possible.

"From an ethical and best-practice standpoint, employers have the responsibility to let employees know if they have decided not to bring them back," Govro said. "Stringing furloughed employees along because there is a slim chance you will need them again is unfair and likely to create bad feelings that may surface later, either on the internet or in a lawsuit."

Key takeaway: Before you decide to furlough any employees, you need to understand the relevant laws and plan how you'll handle the communications, such as in the scenario that you do not ultimately call the employee back to work.

Pros and cons of furloughing employees

You should be aware of the advantages and drawbacks (for both you and the employee) of furloughing staff before you make this decision.

Aside from cutting costs, these are the three primary benefits of furloughs:

Aside from the obvious disadvantage of a temporarily limited workforce, there are three primary downsides to furloughs:

Key takeaway: Furloughs are a good option for businesses that need to cut costs and reduce future recruitment efforts, but they come with the disadvantages of complex guidelines, potential loss of valuable employees and low company morale.

How does a layoff work?

Laying off employees is less complex than furloughing them. A layoff is essentially just a regular employee termination, meaning the company completely severs ties with the employee. However, Govro said a layoff differs from a typical termination in that the employer and employee acknowledge that the end of the employment relationship is only due to lack of work or funds.

"Employers doing a large layoff (relative to their size) will also need to consider state and federal WARN laws, which require a certain amount of notice to employees and state agencies prior to the layoff," said Govro.

Some industries, such as those with seasonal workforces (restaurants, tourist attractions, ski resorts, etc.), lay off their employees with the intent to rehire them eventually. In this case, these layoffs may be considered "temporary" and typically only last up to six months. Although it may be an employer's intent to rehire seasonally laid-off employees, all parties involved must understand that this is not guaranteed.

Key takeaway: A layoff differs from a firing in that the termination is due to a lack of funds or available work. Although layoffs are considered a permanent termination, some seasonal businesses lay off employees "temporarily," with the intent to rehire the following season.

Pros and cons of laying off employees

Aside from cutting salary costs, there are three primary advantages to layoffs:

Aside from the obvious disadvantage of having a smaller workforce, these are three downsides of layoffs:

Key takeaway: Layoffs can be good for businesses that need to permanently reduce the size of their workforce, but they have potential disadvantages, such as eventual rehiring costs, the permanent loss of valuable employees and low company morale.

Choosing between furloughing and laying off employees

Although there is often no clear answer as to whether an employer should furlough or lay off their employees, some businesses are restricted in their choices. Dalal gave some examples:

For small businesses that employ union employees under a collective bargaining agreement (CBA), the release of employees for any reason – furlough, layoff or straightforward dismissal – is governed by several rules in the CBA.

Employees of a major corporation – one that either cannot lose market share or is part of the national security apparatus – are much more likely to be furloughed, such as when a rotating employee schedule might open up more work while also easing financial burdens.

Assuming your business has the freedom to choose between furloughs and layoffs, you'll have to evaluate several factors to determine what works best for your organization and current situation. Govro said employers need to weigh the costs of each choice against what is best for their employees (both those being laid off and those who stay behind) as well as the impact of either choice on their reputation.

"It is a delicate balance to weigh the needs of the business in the moment with the business you envision for the future," Stafford added. "Having a clear picture of what's needed today for your business to survive and laying it out on the backdrop of what you want to achieve long-term can help."

Key takeaway: To choose between a furlough and a layoff, you must weigh the cost of each choice against what is best for you and your employees.