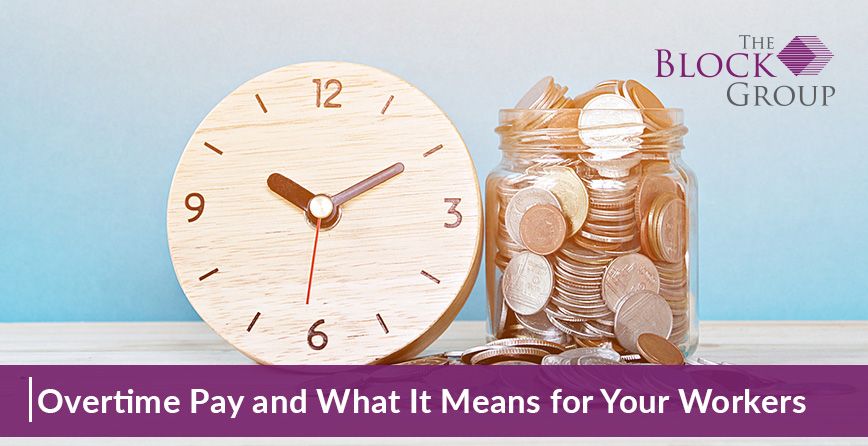 Overtime Pay and What It Means for Your Workers

Learn what overtime is and how you should dole it out to your employees.

There are some weeks when, even though your employees have put in their 40 hours, you still need more work done. You can ask for that additional work from your employees, but it's going to cost you more per hour than you normally pay staff, taking the form of overtime pay.

What is overtime pay?

Employees who work more than 40 hours a week are entitled to a higher rate of pay for the additional work. This is called overtime pay. Federal overtime laws require employers to pay certain employees who work more than 40 hours in a week at least "time and a half" for the extra time they put in. For example, if an employee makes $30 an hour, they would receive $45 for each hour of overtime they work. (Time and a half is the minimum amount you have to pay for overtime work; you have the right to pay employees more than that if you choose.)

Overtime has been law in the American workforce since the passage of the Department of Labor's Fair Labor Standards Act in 1938. Though it initially ruled that overtime didn't kick in until an employee had worked 44 hours in a week, the FLSA was amended two years later to reflect the move to a 40-hour workweek, lowering the threshold for overtime pay.

These legislative changes came about after more than a century of worker rights activists and labor union groups calling for better working conditions. Workers in the 19th century regularly worked roughly 100 hours per week. It wasn't until Henry Ford adopted five-day, 40-hour workweeks in his Ford Motor plants that the idea of "less work equals more productivity" took hold, though the U.S. government had instituted eight-hour days for its employees as early as 1869.

How does overtime work?

Since the FLSA defines a workweek as "any fixed and regularly recurring period of 168 hours – seven consecutive 24-hour periods," overtime can run as long as you need if you properly compensate employees for the additional time. [Need help tracking exactly how long your employees work each day? Check out our recommendations for the best time and attendance systems.]

Key takeaway: Overtime pay is not a perk, but a federal labor law that protects against workplace exploitation. Employees classified as nonexempt are entitled to extra pay for any hours they work over 40 in a week.

How do you calculate overtime pay?

Under federal law, overtime compensation is paid at a rate of at least 1.5 times the employee's regular pay rate, otherwise known as "time and a half." There's no maximum amount that a company can pay to compensate a person for their overtime work, so businesses sometimes offer double pay or higher for overtime, usually when the shift being considered for overtime is particularly undesirable.

Using the time-and-a-half rule of thumb, you'd calculate overtime pay by multiplying an employee's hourly rate by 1.5 and then multiplying the result by the number of overtime hours they worked. You then add that total to the amount they make within a 40-hour workweek.

For example, if an employee who makes $15 an hour worked 45 hours in a week, this would be the equation:

The equation works regardless of how much overtime you offer your employees. Note that this equation only applies to nonexempt employees, and the total pay for the week, including the additional payment for overtime, is subject to regular tax rates.

Key takeaway: You must pay an employee at least 1.5 times their normal hourly rate for each hour of overtime they work.

When most people talk about overtime, it's typically in the context of a 40-hour workweek paid on an hourly basis. Salaried workers, however, do not get paid by the hour. While it may be safe to assume that they would not be able to collect overtime, Robert L. Föehl, business law and ethics professor at Ohio University, said that couldn't be further from the truth.

"It is absolutely critical for employers to understand that paying a salary for a job does not automatically exempt that job from the overtime requirements of the FLSA," he said. "Many employers do not intuitively understand this."

According to Föehl, if you have salaried employees, it's imperative to determine whether they match the exemptions outlined in the FLSA, meaning "the minimum salary must be met and the required duties must be performed."

What are overtime pay exemptions?

Certain employees are exempt from both overtime pay and minimum wage regulations. According to the FLSA, an exempt employee can't collect overtime if they are "paid on a salary basis at not less than $684 per week" and work as "bona fide executive, administrative, professional and outside sales employees." The Department of Labor also exempts "certain computer employees" from overtime pay regulations.

The duties that make an employee exempt include managing at least two other employees and having the authority to hire or fire employees. You can find the full list of exempt duties on the Department of Labor's website.

When determining the standard salary level of an employee, according to the FLSA, an employer may let 10% of it include a "nondiscretionary bonus and incentive payment (including commissions) paid on an annual or more frequent basis."

What are the penalties for failing to pay overtime?

As a small business owner, you do not want to run afoul of the FSLA's overtime rules. Not only does it open you up to potential lawsuits from current and former employees, but you could also be liable for the unpaid overtime.

Companies that violate overtime laws are investigated by the Department of Labor's Wage and Hour Division. Those investigators recommend changes to ensure such violations don't happen again. The employer might then have to pay any back wages owed to the affected employees, in addition to a "liquidated damages" penalty, which is often calculated as the amount of back wages owed. As a result, failure to comply with the FLSA could cost 200% more than just paying the overtime in the first place.

Violations that appear to be committed on purpose could also result in fines of up to $10,000 and the threat of imprisonment if the business owner is a repeat offender.