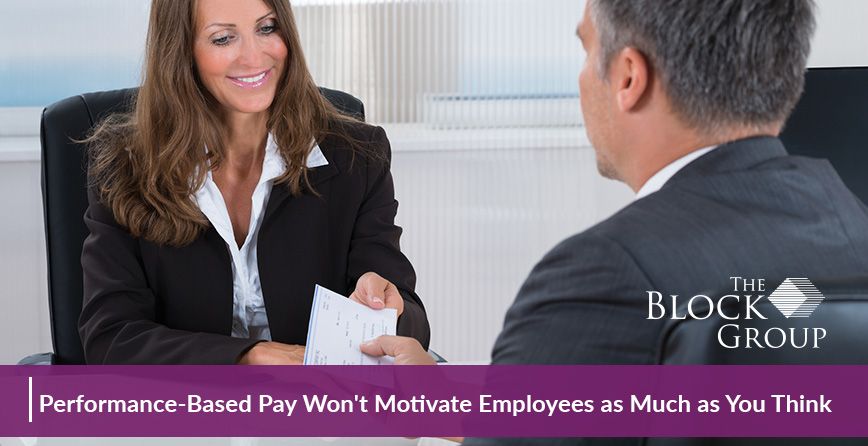 Performance-Based Pay Won't Motivate Employees as Much as You Think

While performance-based pay structures can encourage employees to work harder, they also can cause higher stress levels in workers and lower job satisfaction.

Rather than motivating employees, certain types of incentive-based pay structures end up having negative effects, research finds. A 2017 study published in the Human Resource Management Journal revealed that workers who receive performance-based pay, such as those whose pay ties into individual or company-wide performance, work harder, but they also end up with higher stress levels and lower levels of job satisfaction.

The research found that employees who know that how much money they take home each year is tied to their level of contributions to the organization, or how well their employer as a whole performs financially, are more likely to feel that they are being encouraged to work too hard.

That pressure, in turn, offsets the gains in productivity that the pay structure is designed to produce, the study's authors said.

Although more employers think performance-based pay structures are important for motivating employees and encouraging positive attitudes, this study is the first to find that these pay schemes are associated with the feeling that work is too demanding or that there is insufficient time to get work done, said Chidiebere Ogbonnaya, the study's lead author and a research fellow at the University of East Anglia at the time of the study.

"By tying employees' performance to financial incentives, employers send signals to employees about their intention to reward extra work effort with more pay," Ogbonnaya said in a statement. "Employees, in turn, receive these signals and feel obliged to work harder in exchange for more pay."

Although employees may value these earnings and see the pay structure as a positive, the ultimate beneficiary of their extra effort is the organization.

"As a consequence, performance-related pay may be considered exploitative, or a management strategy that increases both earnings and work intensification," Ogbonnaya said.

What is performance-based pay?

As the name implies, performance-based pay is compensation that's tied to employees' contributions to a company. Think of a car salesperson who works on commission; if no cars sell that day, the business doesn't generate revenue, so the employees don't, either.

This kind of pay structure ensures that only the top-performing employees survive. Businesses say it's a great way to improve employee performance.

However, people in careers that use this payment structure don't necessarily make more money. The U.S. Bureau of Labor Statistics shows that retail sales workers make only $24,340 per year, on average. Real estate and advertising sales agents average double that, which is less impressive when you consider a house costs $200,000 and a Super Bowl ad costs $5.6 million. The commissions on these sales are few and far between, split up among a large salesforce. In short, performance-based pay is great when both the company and employee are performing well, but it's also a double-edged sword.

When the researchers in the study looked specifically at pay tied to employer profits, they found that performance-based pay had a positive impact only on job satisfaction, employee commitment and trust in management if the profit-related pay was distributed widely across the organization.

The study also found that when profit-related pay was given only to a small proportion of the workforce, there were lower levels of job satisfaction, employee commitment and trust in management.

Kevin Daniels, one of the study's authors and a professor at Norwich Business School in the U.K., said the study shows that employers should ensure that mechanisms for distributing organizational profits are administered efficiently so that deserving employees are not overlooked.

"If profit-related pay is spread across the workplace, employees may show greater acceptance and respond with positive attitudes," Daniels said.

Many studies have shown that pay does not relate to performance, at least not directly. No matter how much you pay employees, they'll eventually cycle through their normal routines. If those routines include slacking off and underperforming, then that's what will happen.

Moreover, a study from Harvard Business School found that not all employees respond well to incentive-based pay. For example, accounting or human resources professionals may want a steady salary instead of being paid commission for each report they complete. Still, pay increases and bonuses for bulk work, even in operational environments, can be beneficial.

There's also a chance of corruption: If employees get in desperate financial situations outside of work, they may cheat the system to get more pay. This issue is what caused Wells Fargo retail bank employees to fraudulently open customer accounts to meet aggressive sales quotas, resulting in a $575 million lawsuit at the end of 2018.

If you want performance-based pay to motivate employees, it can help to make it fun. Put up leaderboards, and set goals. For example, purchase a variety of cool prizes, like a bicycle, the latest gaming console, Bluetooth headphones, a laptop, gift cards or event tickets. Put all of the prizes in a display case. This will keep employees excited and give them something to focus on to work harder.

Your team members should understand that their success and paycheck are in their own hands.