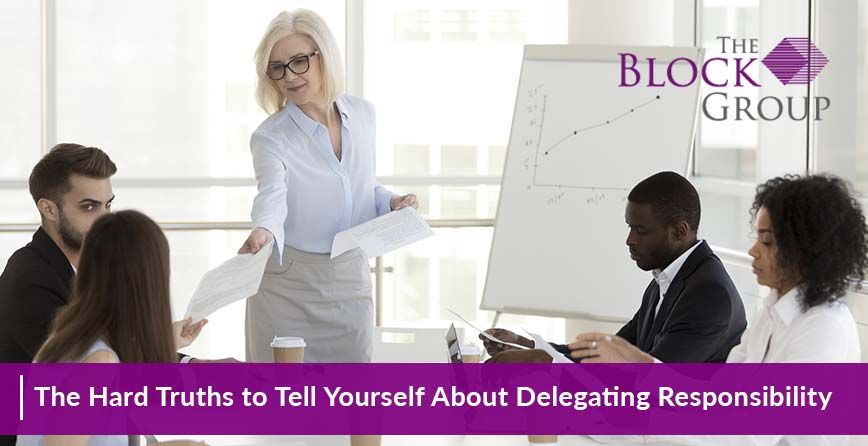 The Hard Truths to Tell Yourself About Delegating Responsibility

Delegating responsibility to capable employees can be the best course of action for most entrepreneurs. Sometimes, though, it can be a disaster. Only by immersing yourself in your product and your team will you gain the understanding needed to lead and motivate the people working for you. That way, when it is time to delegate responsibility, you won't risk delegating tasks to the wrong person. Reason: You'll have already worked alongside that person and learned his or her strengths and weaknesses.

Here are three more factors to think about it when you're deciding whether to delegate a task:

In the gestational stages of a startup, before a seed round has been raised or a product has launched, it’s important that founders be involved in every task. Even after the company has gained some initial traction, founders should again be present during regular performance reviews and clearly understand the company’s financial health.

At any true tech startup, at least one founder should be regularly involved in product development and testing. In short, leaders should know enough about their companies to be able to temporarily take over any position should the need arise.

In 2016, Render Media was one of the fastest-growing companies in America. Ultimately, a change to Facebook's algorithms forced the startup to shut down, but its initial success was widely attributed to the hands-on management style of its founders.

CEO Vic Belonogoff demonstrated this by doing everything from writing and publishing content, to learning how to use Drupal, to trafficking ads, all of which allowed him to gain his employees' respect and keep costs under control as the company grew.

2. Listen to your employees.

If your employees tell you you probably shouldn’t be working on a particular task, that’s a sign. Your team will often drop hints if they think you’re trying to do too much; they may even be straightforward about it. Either way, don’t ignore them. Instead, look for ways to help them do the task themselves.

Majid Al Futtaim owns and operates more than 20 malls throughout the Middle East, including one of the largest in the world, the Mall of the Emirates. He walks each of those malls every week, paying attention to the numbers of bags shoppers are carrying and the merchandise in those bags.

This “shopping bag test” allows him to notice things that his employees might not -- and redirect their focus, if necessary.

Whether you’re a middle manager or the CEO, know that "delegating" doesn't mean giving yourself less responsibility. Instead the goal is to make ensure that the responsibilities you do have are properly aligned with those where your time is best spent.

When deciding whether you should devote hours to a particular task, it can be helpful to know the monetary value of your time. Determine your hourly rate -- $150 an hour, for example -- and then decide whether someone else could do the same task and achieve the same results for less. If so, delegate that work.

Naturally, you’ll always want to be doing things that you love to do. Oftentimes, the joy you get from those activities is worth occasional lost productivity. Putting a real price on your time can help you understand what those hours cost and can be critical to your success as a founder.

There's an interesting calculator powered by an organization called Clearer Thinking that helps you weigh all the variables and determine what your time is actually worth beyond simple salary. Ultimately, the old adage is true: Time is money. You should waste neither.

Let's be clear about one thing: You are not an entrepreneur if you delegate most or all of your important duties. An entrepreneur is, by definition, someone who constantly gets his or her hands dirty solving problems.

Delegation is only a means to offload duties less centric to your core capabilities as a founder so that you can focus on where you deliver the most value. Far too much bad advice comes from teachers and online articles and claims that if you don't delegate excessively, you are not a real leader. This thinking is myopic and ego-centric.

Delegating too early and delegating the wrong duties is actually more damaging for your business than not delegating at all. The most successful entrepreneurs, Musk included, know this all too well.