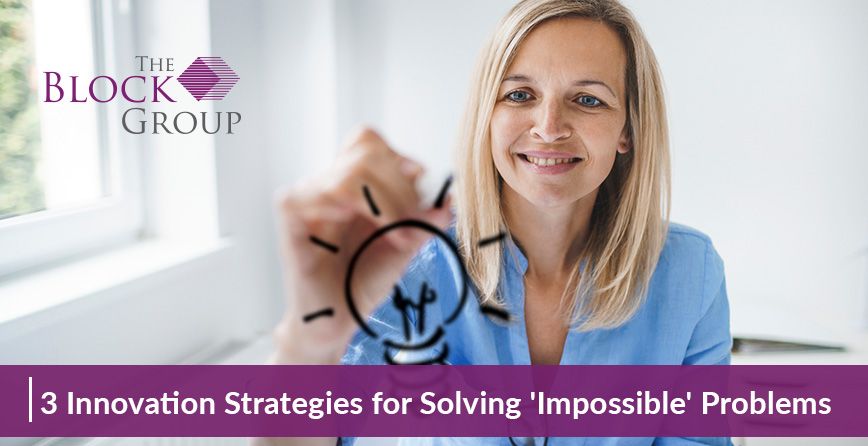 Business without innovation isn’t business at all; it’s stagnation.

The reality is, half of the S&P 500 is projected to be replaced over the next decade. Leaders who settle for stagnation won’t see their companies join or remain in the S&P’s ranks.

Market-leading innovations aren’t typically built by dreamers who simply want something different. Most great innovations are borne of necessity, formulated to solve problems that couldn’t be handled any other way.

For better or worse, the hurdles today’s companies face are higher than ever before. While some will surely fail to surmount them, others will rise to the challenge with next-generation innovations.

While that’s a tall order, it’s not impossible. Here’s how to translate your toughest challenges into innovations.

1. Ask customers about problems, not solutions

Customers are great at pointing out problems, but they’re awfully bad at looking beyond their current reality. Most people were just fine booking hotel rooms until Airbnb showed that cheaper, bespoke stays could be had by renting directly from homeowners.

The key is to read between the lines. Take websites: While many sites still aren’t optimized for mobile devices, six in 10 consumers aren’t willing to install corporate mobile apps.

Ask consumers, and they might tell you companies simply need better apps. But why not take the Airbnb approach? Genesis, a marketing-technology firm, created the App-Less platform to provide the same user experience as an app without the need for a download.

Listen to the customer’s problems, but take any solutions they suggest with a grain of salt. As long as it solves their problem with a solid user experience, they’ll adopt it without question.

In some markets, demand doesn’t match up with usage patterns. A good example is contact-tracing apps. In the middle of a pandemic, people would surely be desperate for ways to know whether they’ve come into contact with someone with Covid-19, right?

Maybe, but these tools’ user metrics tell a different story. In the three weeks after its launch, the French national contact tracing platform was used only 68 times to report positive test results, sending only 14 notifications.

One solution to this challenge is NOVID, a contact-tracing app that records no personal information and works on iOS devices without interfering with day-to-day use. By using ultrasound technology, NOVID gets around having to track users via GPS, protecting their privacy.

The surest sign that NOVID got it right? It’s been adopted by major cities like Santa Fe, New Mexico, as well as educational institutions like Grand Valley State University.

Bill Gates made billions off his computing innovations. Jeff Bezos became even wealthier from Amazon. While great innovations do often pay off financially, forget about income potential for the time being. First, focus on elegantly fulfilling an unmet need. If your innovation does that, it’s highly likely to be profitable.

Start with an issue you care about, like climate change. For years, fighting global warming was seen as unprofitable, but when the need is as pressing and global as climate change, there’s almost always a business solution to be found.

One company that might have found it is Climeworks, a Swiss company founded in 2009 to take carbon dioxide out of the atmosphere. At the time of Climeworks’ founding, the market for sequestered carbon was unclear. Nevertheless, its founders forged ahead. By commercializing stored carbon, Climeworks scored $75 million in funding as well as a partnership with automotive giant Audi.

Most great ideas do not start with dollar signs. Ask yourself what you’re passionate about, and start there. You’ll find your way financially, and you might even strike it big.

Now more than ever, the world needs innovation. If your company is going to make its mark, forget about finding some elusive genius to hire. Start with problems, especially those that are doing real harm. Find out why other solutions haven’t worked, and fill that gap with something that changes the world.

Patty Block, President and Founder of The Block Group, established her company to advocate for women-owned businesses, helping them position their companies for strategic growth. From improving cash flow…. ​to increasing staff productivity… ​to scaling for growth, these periods of transition — and so many more — provide both challenges and opportunities. Managed effectively, change can become a productive force for growth. The Block Group harnesses that potential​, turning roadblocks into building blocks for women-owned businesses​.